Tell your host that you found them at Rusticae

"House with a Quixote´s courtyard"

Historical house with a typical Castilian patio in the town of Orgaz, province of Toledo. At 103 km from Madrid and 33 km from the city of Toledo.

Aunt Cuqui’s house is for the owner´s family as it was for Antonio Machado that patio of Seville of which he spoke in his poem “Portrait”:

“My childhood are memories of a courtyard in Seville,....”

They spent their childhood in this house in Orgaz with a typical Castilian patio paved with stones, with galleries and surrounded by rooms. All weekends and festivities they spent there and the house was what their world encompassed. In it we played pirates, Indians and cowboys,

In short, a childhood linked to a house with an unknown previous history, since it is not known when it was built.

The house belonged to a great aunt on their mother’s side, nicknamed “Cuqui”, who raised us like a grandmother to her grandchildren, The name is a tribute to her.

The structure of the house, with an enclosure around a central courtyard, which in turn communicates with an area of vegetable garden, is reminiscent of Roman houses (domus). This type of structure passed from Roman to Paleochristian architecture, and from the latter to medieval architecture. The word “patio” comes from the Latin “pac” through the Occitan “pàtu”. The courtyard is defined as an open-air, unroofed common space.

Now they want to share with their guests the good vibes that are in this house, so that they can enjoy a few days with family or friends. 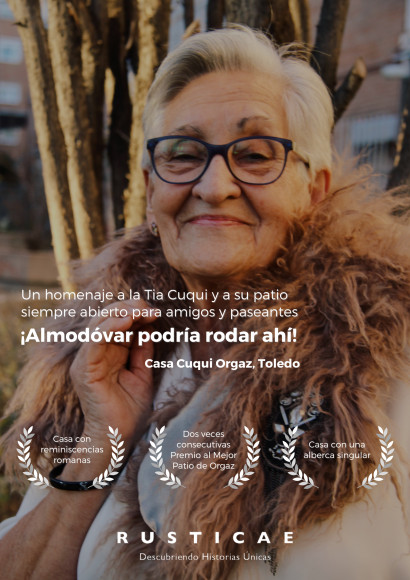 WorkEnd allows you to work from our establishment with all the services and facilities, in the modality of DAYPASS (without staying) or WORK & LEISURE (staying with you)

There is a short circular path (PR-TO-15) that leaves from the Los Yébenes windmills (see above) and has very good views. The length of the path is 15.4 km and the estimated time is 4 hours.

Los “Quintos de Mora” Estate (47 km). It is worth a visit to get into the nature. It is possible to see deer, fallow deer, wild boar and birds of prey. Especially the rutting season is good for watching and listening to the deer. It is necessary to find out the dates of public access, since it is a Hunting Reserve managed by National Parks.

Cabañeros National Park (68 km), a perfect example of Mediterranean forest. Guided tours on horseback or in a 4×4 can be arranged. More information here.

The Layos Golf Course has 18 holes and is located 32 km from Orgaz. Very good option for the golf lovers. More information in its website.

The historic city of Toledo is 33km away, one of the Spanish cities with the greatest wealth of monuments, and declared a “World Heritage Site”. Tourist Information of Toledo here.

A line of historical windmills declared to be of cultural interest, in the vicinity of the Los Yébenes mountain pass (7 km), on the cliff that marks the boundary between the municipality of Orgaz and Los Yébenes. Two of the mills are well preserved, and one of them maintains the complete grinding machinery as it was done in the 16th century.

Consuegra is 35 km away, with its famous windmills and its castle of Muslim origin. More info here.

Archaeological site of “Los Hitos” (7.9 km), within the municipality of Orgaz, near the town of Arisgotas. It was a Visigothic palace and village from the 6th century AD and later a Muslim farmhouse until the 11th century AD. Free access. More info here.

The Visigothic art museum of Arisgotas is also worth a visit. It shows archaeological remains found at the site of the Landmarks. The building is adjacent to the local bar.

Remains of the temple of San Pedro de la Mata (12km), a Visigothic site in the surroundings of Casalgordo, in the district of Sonseca. Built in the 7th century. The access is free. More info here.

Best places to visit in this area

Nearby properties up to 50km