Castrillo is one of the three full rental houses of the teCuento3 proyect..., which goal is offering places for you to feel at home. Castrillo house is located only 11 km from the city of Burgos, in the small town of Castrillo del Val. This stone villa has been restored to its original splendor with...

The Castrillo full rental house is ideal to enjoy a family holiday, thanks to its large indoor and outdoor spaces, such as the four bedrooms with capacity for 8/12 people, the living rooms, the equipped kitchen or the 1,700 m² garden.

Castrillo del Val The town where the house is located still preserves a slow pace of life, surrounded by nature where you can fully enjoy the tradition and tranquility of the Castilian lands.

Bicycles available in the house to discover the surroundings.

Route of the Ebro River. The natural road of the Ebro GR-99 as it passes through the province of Burgos goes through 8 stages. This path from Burgos is one of the most popular due to the spectacular nature of its landscape and the picturesque towns along its route.

Canyon of the Lobos River. The Rio Lobos Canyon is a unique biogeographical space on the axis of a deep canyon of limestone cliffs. In the interior of the limestone mass, a labyrinth of caves has been created at different levels. It also highlights the diversity of fauna, such as the griffon vulture and the golden eagle.

Lagoons of Neila. The Lagoons of Neila are an impressive set of lagoons of glacial origin. The most spectacular glacial circus is the one that is occupied by the dark waters of two large lagoons: Laguna Negra and Laguna Larga.

Burgos. The city of Burgos is one of the most beautiful in Spain, and is only 11 km from the house. The city has corners, squares and alleys of singular flavor and great beauty, not only for its monumentality but for its beautiful walks and gardens. Its impressive Gothic cathedral stands out, declared a World Heritage Site by UNESCO.

Atapuerca. Human activity has left a deep impression in the province of Burgos. The most outstanding page of its past are the hominid deposits of the Sierra de Atapuerca. Visit the Museum of Human Evolution, in the center of Burgos.

Surroundings of Castrillo del Val. In the surroundings of the town you can visit other spectacular places, such as the magnificent monastery and royal pantheon of the Cartuja de Miraflores just 9 km from the house. Another Monastery full of history, 3 km away from the house, is San Pedro de Cardeña, which evokes the memory of El Cid.

Monastery of Silos and Covarrubias. This famous monastery contains one of the flagship jewels of the Romanesque world: its monastic cloister. Do not forget to reserve a time to listen to the monks officiate their religious services in Gregorian chant.

Santiago's road. Castrillo del Val is linked to Burgos by the Camino de Santiago, a perfect excuse to become a pilgrim for a few days and discover the wonders of the Camino in the province of Burgos. The populations of Redecilla del Camino, Belorado, Villafranca Montes de Oca, Burgos or Castrojeriz stand out.

The Merindades. The Burgos region of Las Merindades houses a rich archaeological and artistic heritage. For example, the vestiges of Ojo Guareña, the dolmens of Huidobro, Busnela and Porquera de Butrón, Roman road or the settlements and Visigoth temples.

The Bureba. The Bureba is one of the first regions that acquired a definite personality within the Castilian county. Among its rich monumental heritage we must highlight a series of Romanesque churches, the Monastery of Knee or the hermitage of Our Lady of the Valley.

Gastronomy in the area

Several of the dishes of the Burgos gastronomy have become stars of the national culinary art. The protagonist is the suckling lamb roasted in a wood-fired oven, although you also have to try the garlic soup, the fried rice pudding, the rotten pot, the snails with the burgalesa or the fresh cheese from Burgos. The wine also stands out, and as it shows its numerous wines with Denomination of Origin, among which those of Ribera del Duero, Arlanza and Rioja stand out.

A little while in the open air. Find your corner in the immense garden of 1,700 m², ideal for walking, lying, having breakfast at one of the tables or savoring a delicious meal in the covered dining room, designed to make a barbecue with friends.

Rest with glamor. The interior of the house stands out for the exquisiteness of its decoration. In addition to the fusion of the wooden beams with the wooden floors, the rooms are dotted with beautiful antiques and pieces of art brought from all over the world. Read a book, talk or rest in one of its rooms, divided between the three floors.

Best places to visit in this area 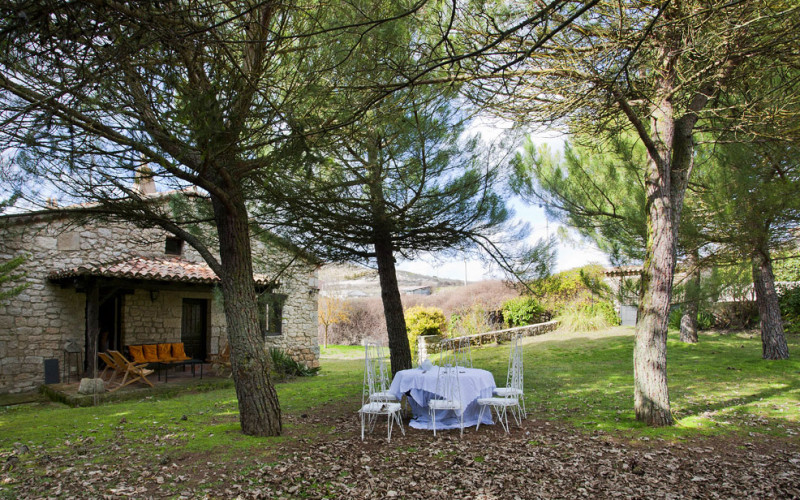 September: 10% discount on stays of 4 nights

Benefit from a 10% discount for stays of 4 nights during the month of September. Accommodation in a full rental house for a maximum of 8 people with a private garden in the province of Burgos.

September: 20% discount on stays of 5 or more nights

Benefit from a 20% discount for stays of 5 or more nights during the month of September. Accommodation in a full rental house for a maximum of 8 people with a private garden in the province of Burgos.

Nearby properties up to 50km

We inform you that our telephone service hours during September will be from 10 am to 2 pm.